Skip to content
Home deliveries on the rise, vehicle emissions and air pollution don’t need to be | 10.12.20

Home deliveries on the rise, vehicle emissions and air pollution don’t need to be

The rise of ecommerce – the buying and selling of goods over the internet – is growing exponentially and shows no sign of slowing down.  This new normal for everything from picking up a gallon of milk to “Black Friday” means that commercial delivery vehicles are on a critical path. These vehicles could grow into a massive roadblock to solving our converging climate and air pollution challenges, or they could evolve into a powerful tool for change.

According to the US Census Bureau, ecommerce represented just 1.3 percent of retail sales in 2000 and jumped to a 14.2 percent share by 2019. Data from 2020 shows massive year-over-year growth in online orders immediately following the impact of COVID-19 (Figure 1). Through social distancing and other preventative measures, individual shopping behaviors have shifted to rely more and more on the internet as a marketplace. Online deliveries have decreased after peaking at the end of April/2020 but continue to outpace pre-pandemic levels. Based on recent insights, this trend could continue to grow sharply during the holiday season.

With the pandemic raising many questions about the stability of the economy, future trends, and the accuracy of these projections, United States Census data shows that online retail sales have not been dramatically affected by recessions (Figure 2). As both older and younger age groups tap into the rapidly growing number of ecommerce services available – and with smart technology enabling retailers to more effectively advertise their products online and tailor customized user experiences – there are significant shifts that show no sign of reversing. 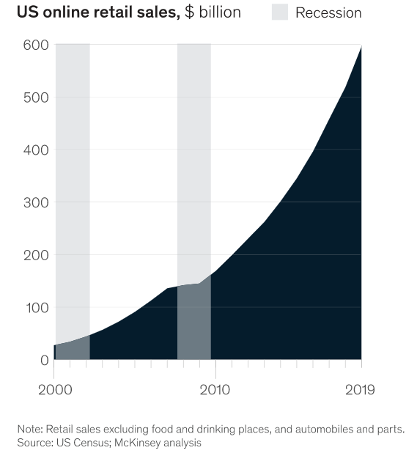 The impact of these shifts – both positive and negative – are apparent for online and traditional retailers. Amazon has doubled its year-over-year profits from $2.6 billion to about $5.2 billion in July. Meantime, bankruptcies from major retailers have been accelerated by the costs incurred by pandemic closures. With more large retailers as well as small businesses shifting the way they do business, logistics and delivery companies will have to shift as well. A recent announcement from Wal-Mart showcased the superstore’s own delivery service (Wal-Mart Plus) as a challenger to the enormously successful Amazon Prime service.

In a weekly update report from mid-2020, DAT—a freight and analytics service—reports that despite an 11 percent drop in trucking volumes in the U.S. when compared to pre-pandemic levels, there was a 60 percent increase in light-duty commercial vehicle trips involved in last-mile ecommerce deliveries.

With the growth in ecommerce deliveries comes the concern about increasing emissions and air pollution from delivery vehicles. At the same time, zero-emission technologies are rapidly advancing and could eliminate tailpipe emissions from delivery vehicles. Companies with large logistical operations such as UPS, Amazon, and the Ingka Group (Ikea) have set ambitious goals for electrification with the aim of increasing sustainability and potentially reducing fuel costs. UPS and Amazon have ordered 10,000 and 100,000 electric delivery vans respectively and Ikea aims to electrify its entire last-mile delivery fleet by 2025. Indian ecommerce giant Flipkart has committed to transitioning 100% of its logistics fleet to electric vehicles by 2030. In addition, Wal-Mart also announced that its entire fleet will be zero-emissions by 2040. Despite higher initial sticker prices due to relatively low production volumes, electric-drive technologies are cheaper to operate and will eventually become cost competitive as the production of electric vehicles increase.

Driving patterns for urban deliveries are conducive to electrification. DAT reports that, when compared to pre-pandemic levels, trucks are stopping more frequently to refuel due to shorter trips with multiple stops and lower engine efficiency. With technology like regenerative breaking that benefits from stop-and-start duty cycles, short fixed routes, and depot charging, electric light- and medium-duty delivery vehicles are well positioned to succeed in this segment of the market and outclass their diesel counterparts, in particular when production volumes bring them in better cost parity.

Beyond the increasingly strong business case for zero-emission commercial vehicles, these vehicles can also play a major role in cleaning up our air and reducing diesel pollution, in particular in disadvantaged communities. Studies show that areas with lower socioeconomic status and neighborhoods that are comprised predominantly of people of color are exposed to higher levels of pollutants known to cause or exacerbate health conditions. In California, African Americans and Latinos are exposed to particulate matter (PM2.5) pollution that is 43 and 39 percent higher than whites respectively. The lowest income households in California were found to be located in areas where PM2.5 is 10 percent higher than the state average. PM2.5 is linked to aggravated asthma, increased respiratory symptoms, and even premature death in those with heart or lung disease according to the United States Environmental Protection Agency. PM2.5 is one of the many toxic pollutants from diesel trucks we can expect to see rise with the ecommerce boom.

Zero-emission commercial vehicle technologies, which play a critical role in curbing air pollution from diesel, are on the cusp of an inflection point from a policy, adoption and technology standpoint globally. About 35 percent of all logistics vehicles in Shenzhen, China are already electric. California recently passed the most forward-looking truck manufacturing rule in the world requiring 75 percent of all new urban delivery trucks and vans to be zero emissions by 2035. The Netherlands requires its 30-40 largest cities introduce zero emission zones for freight in cities. These clear policy signals and rapid technology development are contributing to a zero-emission model boom. The number of zero-emission commercial vehicle models for sale or soon to be for sale is projected to more than double from 2019 to 2023 in the U.S. and Canada, with similar trends developing in other global regions.

In order to grow these zero-emissions technology segments as quickly and efficiently as possible and gain the maximum emissions, air quality and economic benefits, we must invest in and grow the zero-emission commercial vehicle segment strategically. The Global Commercial Vehicle Drive to Zero program and campaign, working in partnership with the California Air Resources Board, has devised such a strategy – a technology strategy for growing the zero-emission commercial segment called “The Beachhead Strategy.”

The Beachhead Strategy identifies the commercial vehicle market segments where zero-emission technologies are most likely to succeed first. Those are typically urban applications – like transit buses – where vehicles operate along known routes and relatively shorter distances and can charge overnight at depots. These “first wave” technology segments contribute to the growth and development of other segments such as cargo vans and medium-duty trucks, because zero-emission technologies can be directly transferred to “second wave” segments, and then successfully in further “waves” while market volumes grow. The Beachhead Strategy aligns closely with the market and product strategies of major truck and component makers worldwide. By targeting vehicle deployment in such beachhead segments and aligning policies and incentives across global regions, we’ll achieve much faster economies of scale. 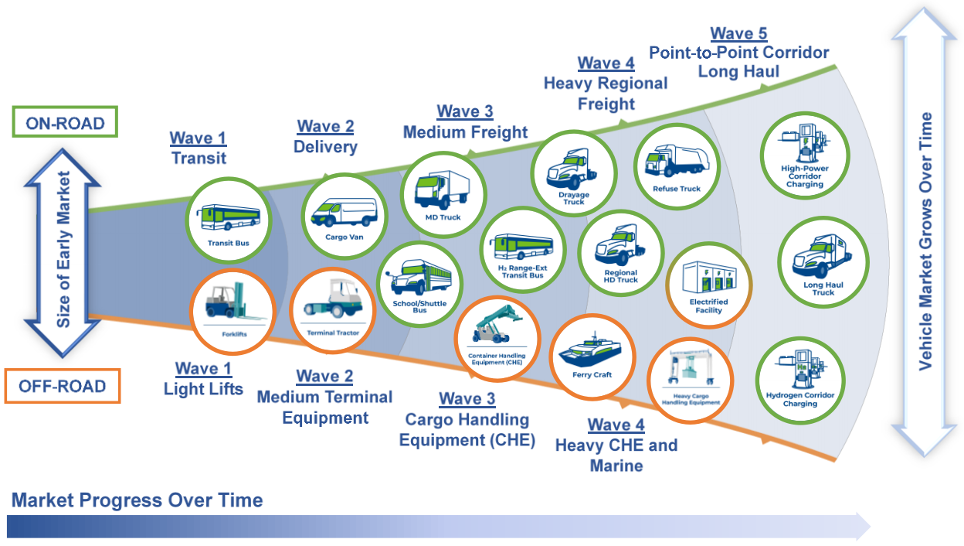 Forward-looking fleets, national and subnational governments, investors and manufacturers have the power collectively to shape our climate and air quality future. By investing in the right technologies today, providing fleets with attractive incentives for zero-emission technologies and aligning policies strategically, our collective future can be one that welcomes a new normal – one that includes an ecommerce boom powered by zero-emission delivery vehicles.

Owen MacDonnell is an associate project manager for CALSTART’s Global Commercial Drive to Zero program and campaign. Nine nations along with over 80 clean transportation manufacturers, innovative fleets, organizations and subnational governments are working under the auspices of Drive to Zero to drive market viability for zero-emission commercial vehicles in key vehicle segments in urban communities by 2025 and achieve full market penetration by 2040.