Progress continues to be made across all transportation industries in the pursuit of 100% zero-emission vehicles and supporting infrastructure. Just last week, another forward-looking company reaffirmed its commitment to reducing and eventually eliminating greenhouse gas emissions from its fleet, while also proving its support in this endeavor to the community at large. 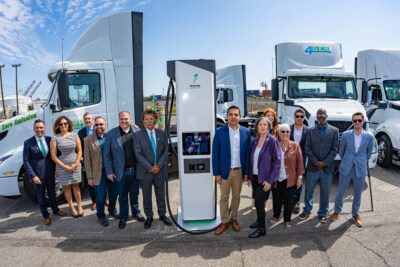 4 Gen Logistics, a Rialto, CA-based drayage freight-handling service, in partnership with the Port of Long Beach, held its Zero-Emission Truck Day on Tuesday, September 13, 2022. A long-time leader in the use of zero-emission (ZE) trucks for its business, 4 Gen announced its 10-year lease with the Port, which will include the installation of 60 public charging stations on-site by early 2024. 4 Gen also reaffirmed its pledge to have a completely ZE fleet by 2025, a full 10 years ahead of California’s ZE regulations deadline.

With a ZE fleet that already numbers 51 class 8 tractors, 4 Gen pledged to purchase only ZE trucks as replacements for its remaining diesel trucks in the coming years, with a goal of achieving a ZE fleet of 100 trucks in the near future. 4 Gen’s current fleet was partially funded through the California Air Resources Board (CARB) Hybrid and Zero-Emission Truck and Bus Voucher Incentive Project (HVIP).

The event at the Port of Long Beach was attended by a number of luminaries, including representatives from the City and Port of Long Beach, state agencies, OEMs and ZE companies, members of the press, and CALSTART’s own Niki Okuk, Deputy Director, Trucks and Off-Road.

A recording of the event can be found at lbtv3.com.