Skip to content
The Future is Now for Hydrogen MHD Vehicles

The Future is Now for Hydrogen MHD Vehicles 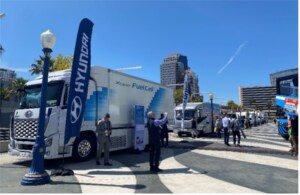 The recent Advanced Clean Transportation (ACT) Expo in Long Beach, CA was proof-positive that hydrogen fuel cell medium- and heavy-duty (MHD) vehicles have arrived. It’s no secret that battery-electric vehicles currently surpass hydrogen fuel cell-powered vehicles on the road and in planned deployments (by a large margin), but interest in hydrogen technology was high at the Expo, particularly for heavy-duty trucks.

Gladstein Neandross & Associates’ 2022 State of Sustainable Fleets report, released on the first evening of the Expo, found that the number of hydrogen fuel cell vehicles and stations awarded through grants had more than doubled since last year’s report. The U.S. Department of Energy has since demonstrated its dedication to backing hydrogen fuel cell technology by committing $8 billion to fund the development of regional clean hydrogen hubs (H2Hubs) across the country.

Hydrogen is quickly becoming a viable option for powering fleets. There were more than 33 hydrogen fuel cell technology exhibitors at the Expo this year, and their packed booths showed just how deep the interest in hydrogen now runs. 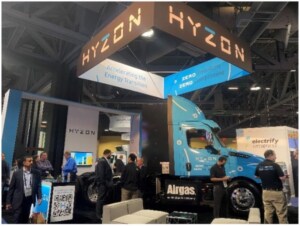 Hydrogen fuel cell-powered trucks were parked in every corner of the Expo Hall. Hyzon’s booth showcased their hydrogen-powered Freightliners and Hyundai’s XCIENT garnered attention both inside the Hall and out front (pictured above). Tevva Truck’s Fuel Cell Range Extender Technology (REX), which blends battery-electric/hydrogen technology for zero-emission freight trucks, drew serious interest. The Expo also featured fuel cell offerings from Hino and Kenworth, as well as the Nikola Tre with its eye-catching cabover design. The full list of fuel cell vehicles on display at the Expo could take up this entire post. 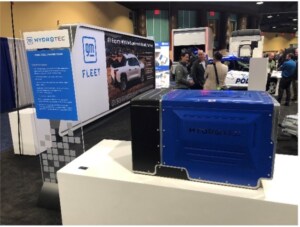 Cummins appeared to take the spotlight on buzz-worthy hydrogen announcements; their investments in hydrogen were on full display at their booth, debuting their 15-liter hydrogen engine, the X15H, next to their fuel cell electric demonstrator truck. Cummins will also be partnering with Daimler Truck North America to develop a Freightliner Cascadia truck with Cummins’ fourth–generation hydrogen fuel cell power train; initial units will be available as soon as 2024. GM saw attendees crowd around their Hydrotec Fuel Cell Power Cube, which can be used in a variety of applications, from locomotives to mining equipment. 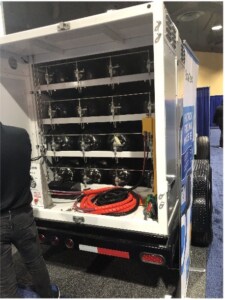 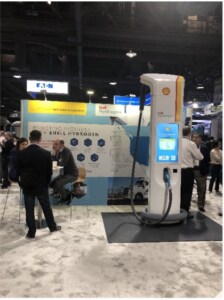 With the level of hydrogen fuel cell excitement drummed up at ACT this year, the race to implement the infrastructure necessary to support these vehicles is on—and the EnergIIZE (Energy Infrastructure Incentives for Zero-Emission) Commercial Vehicles Project is working to do just that. Funded by the California Energy Commission (CEC) and implemented by CALSTART, EnergIIZE provides the infrastructure funding incentives needed to support the transition of old, polluting MHD equipment to zero-emission.

To help address the wide variety of potential applicants to its program, EnergIIZE has set up four different “Funding Lanes,” each with differing qualifications and incentive structures. EnergIIZE dedicated one of these lanes as its Hydrogen Funding Lane.