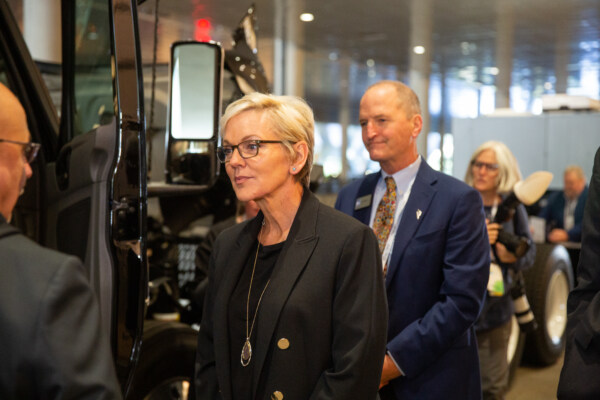 Caption: Department of Energy Secretary Jennifer Granholm (D) with CALSTART CEO John Boesel during her tour of our Zero-Emission Truck Expo at the Global Clean Energy Forum held on September 21-23, 2022 in Pittsburgh, PA.

September 21-23, 2022, CALSTART and its global Drive to Zero program joined the Global Clean Energy Action Forum (GCEAF) and the Clean Energy Ministerial (CEM) in Pittsburgh, PA, in convening global and national leaders around ambitious goals to address the climate crisis, focusing on the rapid implementation of zero-emission transportation solutions. U.S. Energy Secretary Jennifer Granholm chaired the first ever GCEAF and set the tone outlining the Forum’s intentions, “to do something bold. To push the world’s clean energy transition past its tipping point—and propel it dramatically forward.”  Zero-emission medium- and heavy-duty vehicles (ZE MHDV) are critical to solving the climate crisis, promoting healthier air, and delivering economic, job, and operational benefits.

CALSTART/Drive to Zero engaged in a variety of activities at and alongside the Forum, including chairing the CEM Transportation Roundtable, hosting four official CGEAF side events and organizing the Zero-Emission Truck (ZET) Global Expo, featuring 13 currently available electric truck models. Globally MHDVs represent less than five percent of the on-road fleet but emit over 30% of global greenhouse gas emissions and over 75% of on-road particular matter (PM2.5). CALSTART/Drive to Zero’s ZET Global Expo displayed trucks currently available for regional freight, last mile delivery, and refuse operations. Zero-emission technology is ready to meet a variety of MHDV needs, and it currently meets or exceeds the ranges required by most routes for trucks, buses, and vans.

Clean energy leaders from across the United States and around the world visited the ZET Global Expo to tour the vehicles, learn more about the technology, and converse with manufacturers and fleets in attendance. The majority of the vehicles on display were provided by truck builders and dealers, including International Trucks, Lightning eMotors, Lion, Mack, Nikola, Peterbilt, Workhorse, and Xos. These manufacturers were able to answer policymakers’ questions about total cost of ownership, battery supply chains, lightweighting technology, and real-world deployments—where these vehicles are operating on the road.

Attendees were also able to speak with end-user fleets like Amazon, which showed off their custom Electric Delivery Vehicle by Rivian, currently rolling out across cities nationwide, and PITT OHIO, which brought two of their fleet’s electric freight vehicles that are otherwise used in daily operations—a Ford E-Transit van and a Volvo VNR Electric tractor-trailer. Fleets drove home the point to leaders like DOE’s Secretary Granholm, Deputy Secretary Turk, and Michael Berube that these vehicles are not the future; the technology is here—and in use—today. They also highlighted synergies with clean energy action in other sectors. For example, thanks to advancements in zero-emission electricity generation, PITT OHIO is able to power its electric vehicle fleet with sustainable, renewable energy via an on-site microgrid that utilizes wind and solar energy and battery storage.

Pennsylvania Governor Tom Wolf also toured the Expo, spending nearly an hour talking with manufacturers about incremental upfront purchase prices, payback periods, and payload considerations. Mack’s LR Electric refuse truck is manufactured in Pennsylvania, and all of the vehicles CALSTART/Drive to Zero had on display are manufactured in North America – primarily in Pennsylvania, Illinois, Virginia, Tennessee, Indiana, Missouri, Texas, and Colorado. CALSTART/Drive to Zero partners such as Lianne Randolph, Chair of the California Air Resources Board, and Rob Jetten, Dutch Minister for Climate and Energy Policy, also toured the Expo, thanking participating companies for their leadership.

CALSTART/Drive to Zero’s truck display made clear to attendees that ZE-MHDVs offer a viable pathway to decarbonize the road transport sector. Technology has advanced greatly over the last decade. A growing number of OEMs and global fleets ­­demonstrate strong ambition to produce and adopt zero-emission commercial vehicles. Many studies show the cost competitiveness of these vehicles in many parts of the world by the end of this decade or early next decade at the latest. This makes ZE-MHDV deployment a much needed and viable proposition, but it will only deliver its full potential through aligned global ambi­­tion.

The Biden administration’s recently passed Inflation Reduction Act (IRA) includes a $40K tax credit for ZE MHDVs and $100K in tax credits for zero-emission charging infrastructure. This provision is expected to help ZE MHDVs achieve cost parity with diesel trucks five to ten years earlier. CALSTART is already working to scale projects across the country that use the tax credits to move closer to zero-emission goals. Secretary Granholm also broke news of further incentives with her announcement of, “a funding opportunity of up to $7 billion to support up to 10 clean hydrogen hubs to form the backbone of the U.S. clean hydrogen economy.”

The clean-energy transition requires coordinated international action. The Government of the Netherlands and CALSTART/Drive to Zero unveiled a new call to action at the GCEAF, encouraging nations worldwide to join and sign the Global Memorandum of Understanding (Global MOU) on zero-emission medium- and heavy-duty vehicles, aiming for 30% of new MHDV sales being zero emissions by 2030, and a full transition to ZE-MHDV sales by 2040, to facilitate the achievement of net-zero carbon emissions by 2050. The Global MOU combines ambition with an implementation framework to achieve real emission reductions. Currently, 16 nations are signatories to the Global MOU and there are over 55 subnational and private sector endorsers.  It is time for the United States to finalize its commitment by signing the Global Memorandum of Understanding on Zero-Emission Medium- and Heavy-Duty Vehicles.

Finally, to quote Secretary Granholm again, “At this Global Clean Energy Action Forum, we are called to rise. Let’s see how high we can reach.”